Northern Ramblers Car Club – About Us 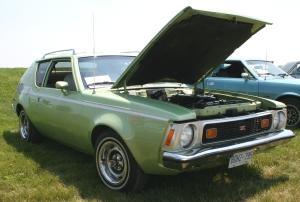 About Us – A Little History

A Look Back; a Short History of the Northern Ramblers Car Club

In 1979, American Motors Corporation was having its difficulties, as were most car manufacturers, but posted record breaking profits for the year. The Gremlin had been replaced by the Spirit this year and the Matador was now discontinued, but one could walk into an AMC dealership and order a 304 powered Spirit based AMX or Pacer, or perhaps a new Concord, which had replaced the Hornet for 1978. All cars came with a new “3-year corrosion warranty” (which is still an industry standard today). Those “in the know” were excited to see how the rumored AWD Eagles, a Concord with Jeep underpinnings, would change AMC fortunes in 1980.

Building French cars was in the future, and the original two-seater AMX was a neglected memory, treated with disdain (as were most “gas guzzling muscle cars”) by most in the emerging era of the four cylinder front wheel drive car. But six or seven Canadian die-hard enthusiasts, tied together by the common bond of recognizing and appreciating the inherent value of the AMX, decided that the time was right to form a club for people who shared their enthusiasm for the car. They had no idea that 25 years later, what they had started would still be going strong with 200 members, devoted to the preservation of the entire marque, spread across Canada.

Club Founders The idea came up after the club founders attended the 1978 Classic AMX Club (founded by Larry Mitchell) international convention in Kenosha, Wisconsin . Founding members Harm and Barb van der Veen (first president), Ken Perrier, Roy Hopkins, Jim Battelle (first secretary/treasurer), and John Workman formed the Classic AMX Club of Central Canada, affiliated with the AMX Club International and devoted solely to the two seater car [note; most of these original members are still members of the NRCC today]. The yearly dues were $12, and the first newsletters were 3 pages double-sided, done up by Barb Vanderveen on a typewriter (wow!) While she worked at home raising her young family. 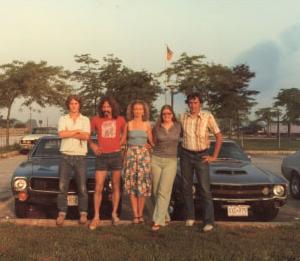 The picture at right was taken on the way back from that first Kenosha trip; from left to right, Ray Pugh (from Baltimore ), John Workman, Deb Workman, Barb van der Veen and Harm van der Veen.

Eventually the logistics of having a two-seater car with a young family, as well as interest from owners of Javelins and other AMC cars, made the need for a club devoted to cars other than the AMX evident to the van der Veens. In 1983, the Northern Ramblers Car Club was formed to meet this need. Barb and Harm traded in their AMX for an SC/Rambler (now owned by Jeff Spratt; see July/August “03 AM Spirit).

On the way back from that first Kenosha trip; from left to right, Ray Pugh (from Baltimore ),
John Workman, Deb Workman, Barb van der Veen and Harm van der Veen.
By the end of 1983, the newly-formed Northern Ramblers had just 10 members, but they were a solid and involved core group. At the Motion 1984 Car show at Exhibition Place in Toronto , the club display showed 4 cars, and took home an award for the 3rd best club display–out of 15 clubs!

The newsletter met the needs of both AMC clubs, and was called “Xs and Os” (for “AMXs” and “Others”?). During the decade that followed, American Motors met its demise at the hands of Chrysler shareholders and executive, and the last AMC made (an Eagle wagon) would come out of the Brampton, Ontario plant in December, 1987. But the two clubs would continue to grow simultaneously until 1994, with a combined membership now up to 127. The clubs were still separate, but due to resource-sharing, finances and management were some what intertwined. In a move to end duplication and ensure the longevity of a club for AMC owners, in early 1994 the two clubs were amalgamated, and took the name we”re familiar with today.

The first president of the newly amalgamated club was Michael McNiece. Norbert Axtmann edited the newsletter (now called, simply, AM Spirit), with technical assistance from Ken Parkman and Dave Baker. Other board members included Kathy Axtmann and Steve Paulitzki. It”s interesting to note that most of this executive board are still members as well!

Membership continued to grow after the amalgamation. Other than a brief bit of political rough water surrounding the AMO and the National convention (held in London in 1995), the club would continue to grow and improve unabated. We now have roughly 200 members nationwide (with a few from the United States ), and the legacy of those who paved the way is a well-established club with a very strong foundation and the rest, as they say, is history! 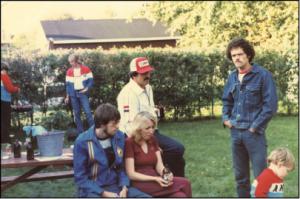 A meeting at the home of Brian Lewis in 1981. Barb van der Veen (with back to the camera),

Rod Marler (?), Dave and Cindy Chapman (seated on picnic table), Ken Perrier directly behind them, Gary Freelen – standing and the van der Veen”s eldest (and then only) son, Sye, in the AMC red, white, and blue top